Constable Scarecrow’s success has been validated and he has now been hired full-time: Scarecrow reacts stoically 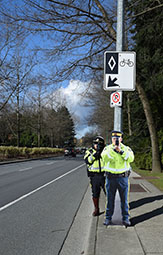 View a high-resolution photo: Constable Scarecrow, the realistic metal cutout of a police officer, stands on pole while a real police officer lurks behind with a laser speed reader

It turns out Constable Scarecrow is worth his weight in metal; the pilot project is now over and an academic study has validated his success.

A recently published study from Doctor Rylan Simpson, an Assistant Professor from SFU’s School of Criminology, found that Constable Scarecrow has a dramatic and immediate effect in reducing speeding when he’s installed on arterial roads. The full-size metal cutout is most effective for the first several days and then gradually becomes less effective until traffic returns to normal. Constable Scarecrow was not particularly effective on quiet, residential streets.

Considering that Constable Scarecrow’s cost is about $360 per unit, it was an easy decision to extend his contract indefinitely (he has still never demanded additional training, meal breaks, or vacation time).

Coquitlam RCMP has already adjusted strategies based on the recent study. Constable Scarecrow is no longer being used on quiet residential streets, and he is being accompanied more than ever by real live Mounties. So while Constable Scarecrow has still never written a ticket, you are more likely than ever to get one if you assume that he is working alone.