On July 5, 2020 at 9:52 a.m. RCMP was contacted by a concerned mother who had discovered a suspected controlled substance in a small bag in a playground. Initial investigation revealed the complainant's 11 month old child was playing in McDonald Park at 262 King Street, Kamloops and found a small container of suspected drugs. Thankfully, this attentive parent managed to secure the item without any injury to the child.

Kamloops, like many other communities in Canada, is still in the grips of an opiod crisis. In BC, this has been considered a public health emergency since April 2016. Unfortunately this means issues like found needles and drugs are something that all parents must be mindful of while in public settings. Thankfully in the case at hand an attentive parent caught her child with these found drugs before any harm could be done. It serves as a good reminder to speak with your kids about the reality of hazards that could be found in any public spaces, - S/Sgt Simon Pillay - RCMP Kamloops Plain Clothes Commander.

In order to assist residents in knowing what to look for, a picture of this exhibit is attached. 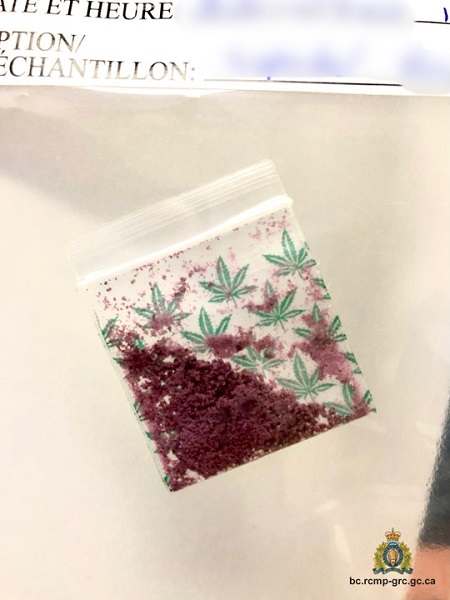 View larger image : Taken of the small baggy containing a purple substance believed to be fentanyl;

Investigators have been seeing fentanyl in Kamloops since 2014. Since then, fentanyl has become the drug of choice (for both traffickers and users) in Kamloops over heroin because of its potency. Drug traffickers acquire fentanyl fairly cheap and mix it with a buffing agent such as caffeine to be sold on the street. Some drug traffickers add colouring to their product to make it a signature product. The most common colour that Kamloops RCMP have been seeing is purple fentanyl, states Cst. Gary Gray of the Kamloops RCMP Targeted Enforcement Unit and court acknowledged expert in fentanyl.

The importation, production and trafficking of fentanyl has been associated to the involvement of organized crime groups. The Kamloops RCMP is focussed on targeting organized crime groups which seize upon and exploit all opportunities to profit from the sale of illicit drugs. If you have information pertaining to local drug trafficking activities, please contact the RCMP at 250-828-3000.

Currently our MRO is not on duty. If you would like to follow up with this story kindly contact the author at simon.pillay@rcmp-grc.gc.ca and calls will be returned as operations allow.